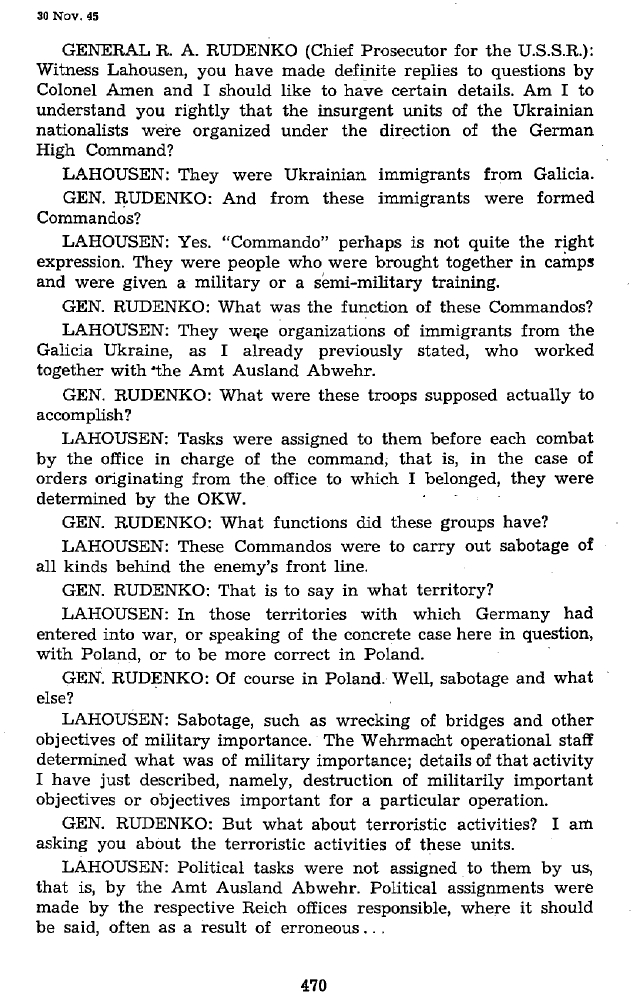 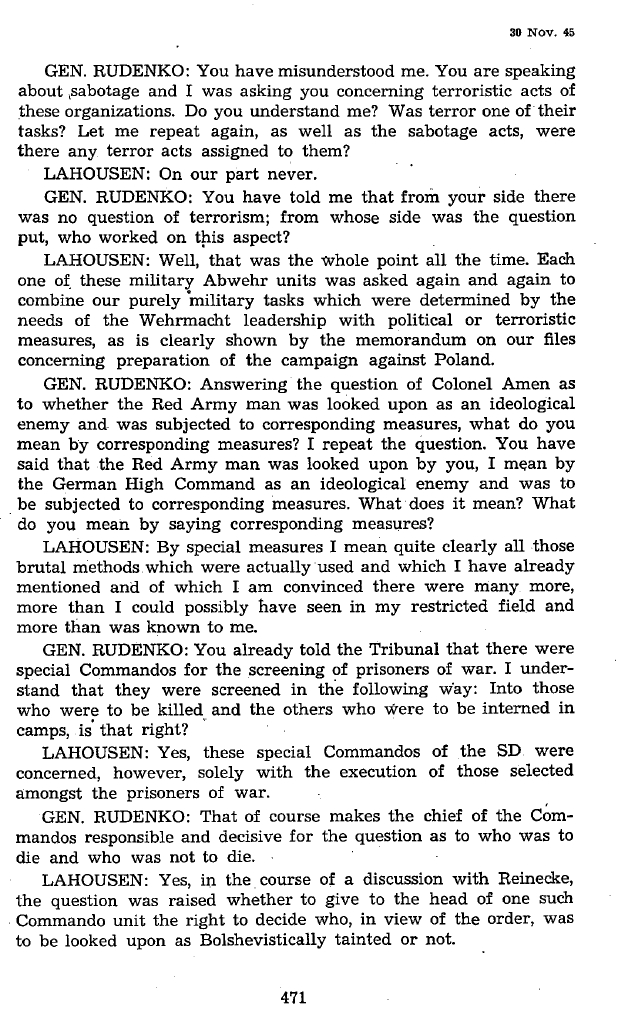 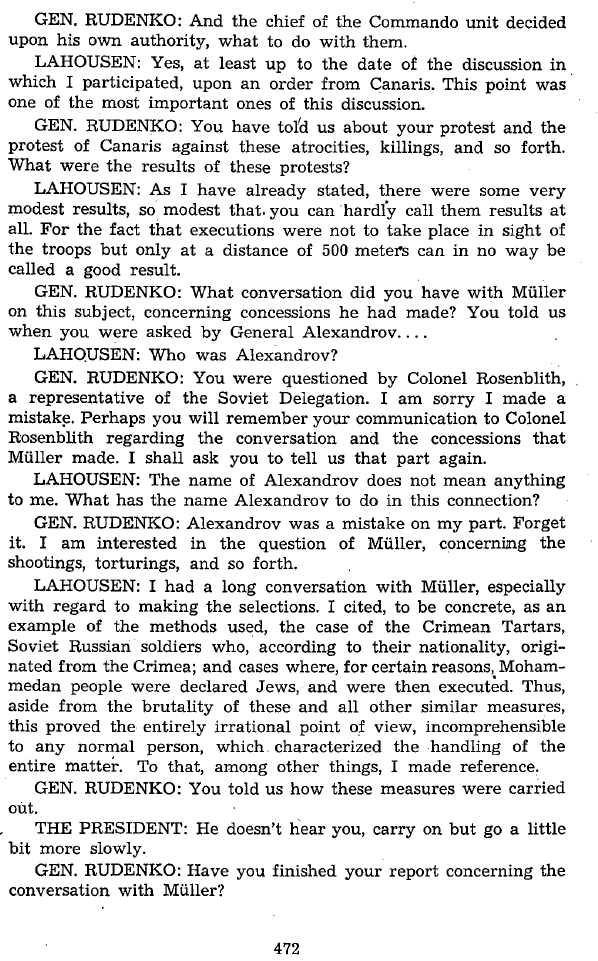 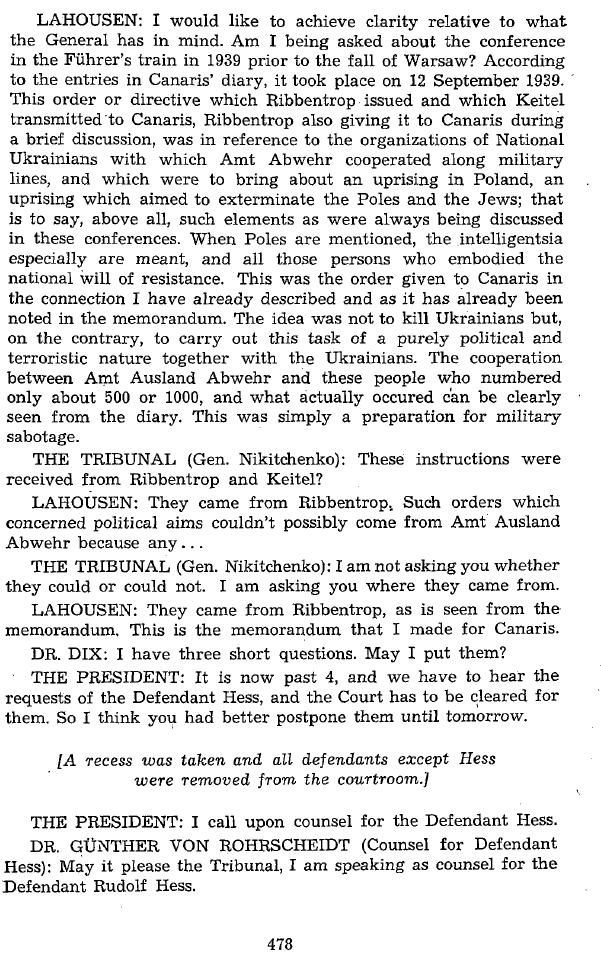 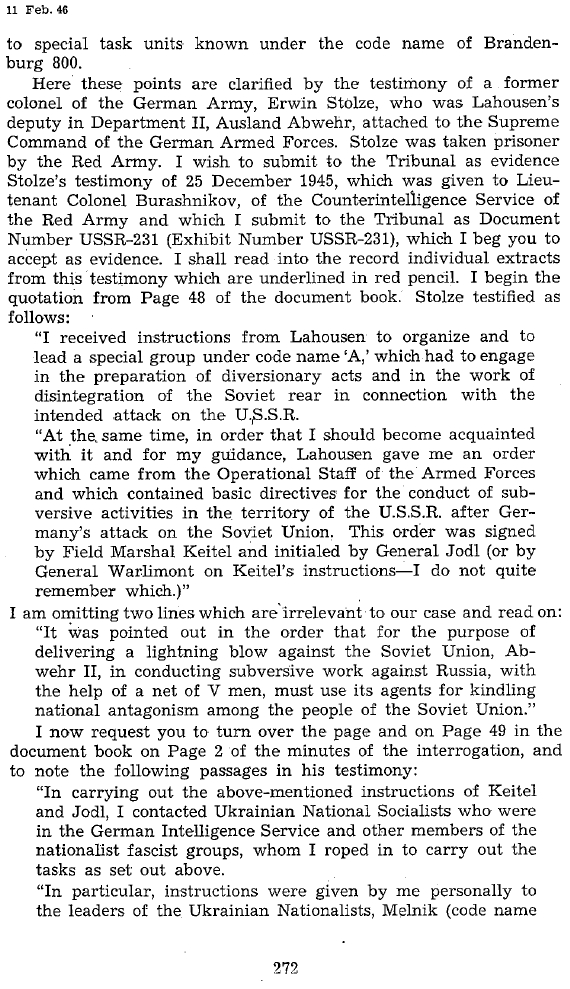 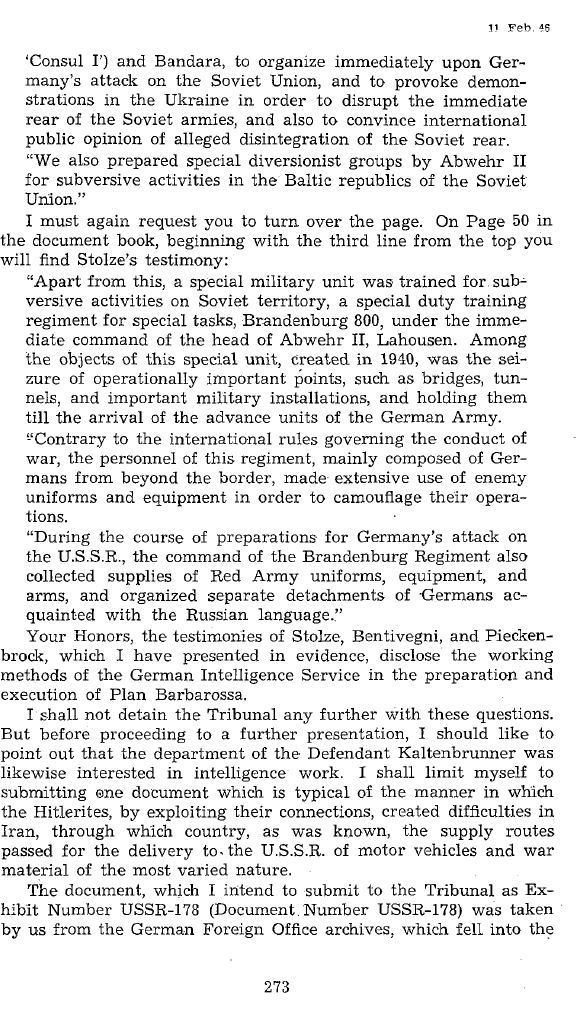 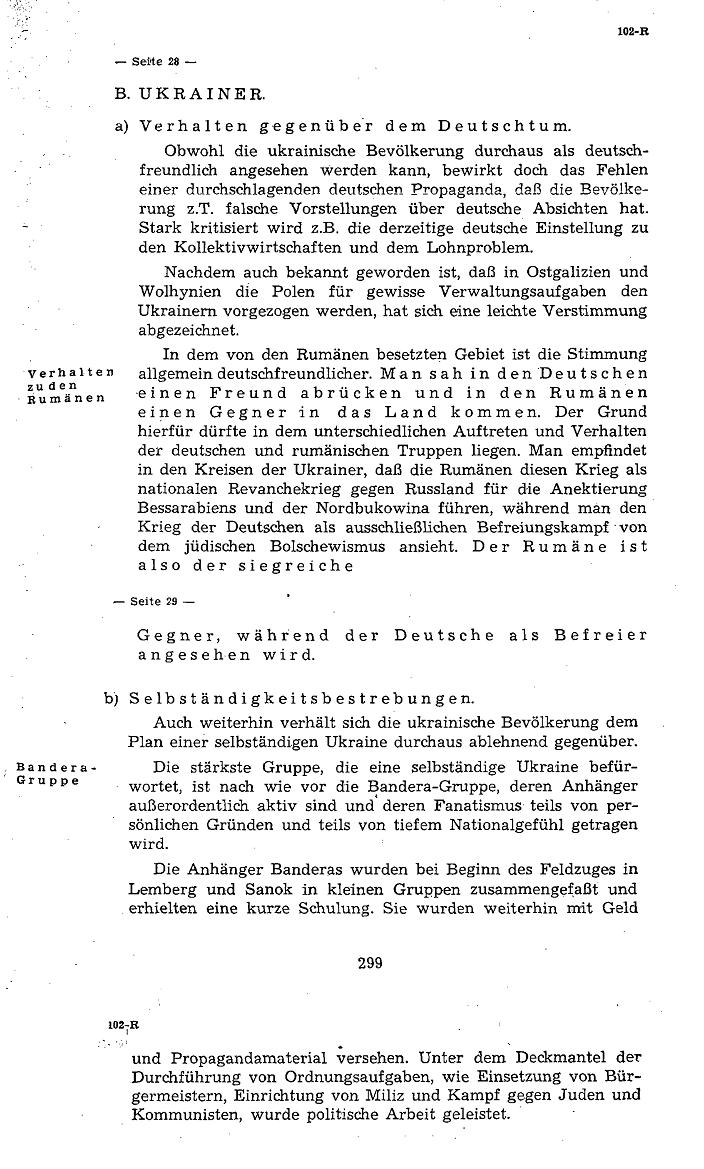 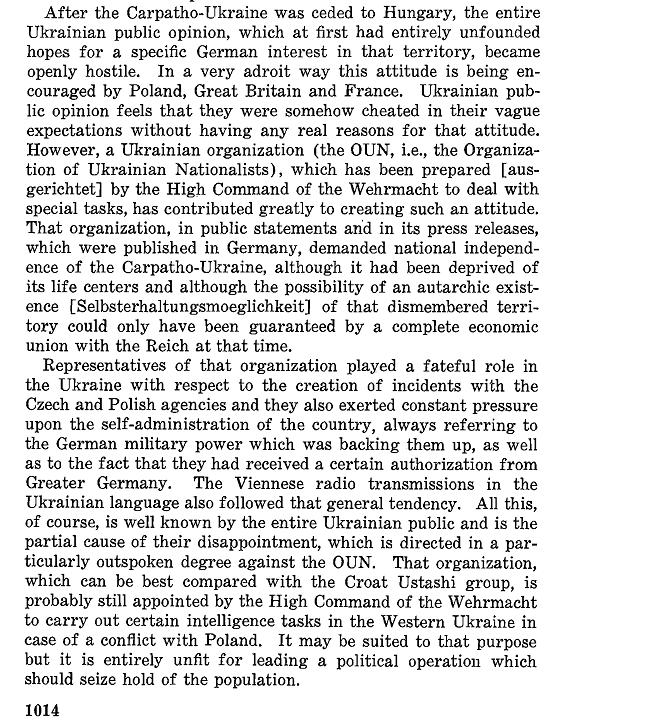 30 NOV. 45
NT_Vol-II.pdf =478 (483)
===
LAHOUSEN: I would like to achieve clarity relative to what the General has in mind. Am I being asked about the conference in the Fuhrer's train in 1939 prior to the fall of Warsaw? According to the entries in Canaris' diary, it took place on 12 September 1939. This order or directive which Ribbentrop issued and which Keitel transmitted to Canaris, Ribbentrop also giving it to Canaris during a brief discussion, was in reference to the organizations of National Ukrainians with which Amt Abwehr cooperated along military lines, and which were to bring about an uprising in Poland, an uprising which aimed to exterminate the Poles and the Jews; that is to say, above all, such elements as were always being discussed in these conferences. When Poles are mentioned, the intelligentsia especially are meant, and all those persons who embodied the national will of resistance. This was the order given to Canaris in the connection I have already described and as ~t has already been noted in the memorandum. The idea was not to kill Ukrainians but, on the contrary, to carry out this task of a purely political and terroristic nature together with the Ukrainians. The cooperation between Amt Ausland Abwehr and these people who numbered only about 500 or 1000, and what actually occured c'an be clearly seen from the diary. This was simply a preparation for military sabotage.
THE TRIBUNAL (Gen. Nikitchenko): These instructions were received from Ribbentrop and Keitel?
LAHOUSEN: They came from Ribbentrop, Such orders which concerned political aims couldn't possibly come from Amt Ausland Abwehr because any.. .
THE TRIBUNAL (Gen. Nikitchenko): I am not asking you whether they could or could not. I am asking you where they came from. LAHOUSEN: They came from Ribbentrop, as is seen from the memorandum. This is the memorandum that I made for Canaris. DR. DIX: I have three short questions. May I put them?
THE PRESIDENT: It is now past 4, and we have to hear the requests of the Defendant Hess, and the Court has to be cleared for them. So I think you had better postpone them until tomorrow.
!A recess was taken and all defendants except Hess were removed from the courtroom.]
THE PRESIDENT: I call upon counsel for the Defendant Hess. DR. GUNTHER VON ROHRSCHEIDT (Counsel for Defendant Hess): May it please the Tribunal, I am speaking as counsel for the
Defendant Rudolf Hess
====

11. Feb. 46
NT_Vol-VII.pdf
http://www.loc.gov/rr/frd/Military_Law/pdf/NT_Vol-VII.pdf
272 (278)
====
Here these points are clarified by the testimony of a former colonel of the German Army, Erwin Stolze, who was Lahousen's deputy in Department 11, Ausland Abwehr, attached to the Supreme Command of the German Armed Forces. Stolze was taken prisoner by the Red Army. I wish to submit to the Tribunal as evidence Stolze's testimony of 25 December 1945, which was given to Lieu- tenant Colonel Burashnikov, of the ~ounterintelkgence Service of the Red Army and which I submit to the Tribunal as Document Number USSR-231 (Exhibit Number USSR-231), which I beg you to accept as evidence. I shall read into the record individual extracts from this testimony which are underlined in red pencil. I begin the quotation from Page 48 of the document book. Stolze testified as follows:
"I received instructions from Lahousen to organize and to lead a special group under code name 'A,' which had to engage in the preparation of diversionary acts and in the work of disintegration of the Soviet rear in connection with the intended attack on the U.F.S.R. "At the.same time, in order that I should become acquainted with it and for my guidance, Lahousen gave me an order which came from the Operational Staff of the Armed Forces and which contained basic directives for the conduct of sub- versive activities in the territory of the U.S.S.R. after Ger- many's attack on the Soviet Union. This order was signed by Field Marshal Keitel and initialed by General Jodl (or by General Warlimont on Keitel's instructions-I do not quite remember which.)"
I am omitting two lines which are'irrelevant to our case and read on: "It was pointed out in the order that for the purpose of delivering a lightning blow against the Soviet Union, Ab- wehr 11, in conducting subversive work against Russia, with the help of a net of V men, must use its agents for kindling national antagonism among the people of the Soviet Union." I now request you to turn over the page and on Page 49 in the
document book on Page 2 of the minutes of the interrogation, and
to note the following passages in his testimony: "In carrying out the above-mentioned instructions of Keitel and Jodl, I contacted Ukrainian National Socialists who were in the German Intelligence Service and other members of the nationalist fascist groups, whom I roped in to carry out the tasks as set out above. "In particular, instructions were given by me personally to the leaders of the Ukrainian Nationalists, Melnik (code name
'Consul 1') and Bandara, to organize immediately upon Ger-
many's attack on the Soviet Union, and to provoke demon-
strations in the Ukraine in order to disrupt the immediate
rear of the Soviet armies, and also to convince international
public opinion of alleged disintegration of the Soviet rear.
"We also prepared special diversionist groups by Abwehr I1
for subversive activities in the Baltic republics of the Soviet
Union."
I must again request you to turn over the page. On Page 50 in the document book, beginning with the third line from the top you will find Stolze's testimony:
"Apart from this, a special military unit was trained for sub- versive activities on Soviet territory, a special duty training regiment for special tasks, Brandenburg 800, under the imme- diate command of the head of Abwehr 11, Lahousen. Among the objects of this special unit, created in 1940, was the sei- zure of operationally important points, such as bridges, tun- nels, and important military installations, and holding them till the arrival of the advance units of the German Army. "Contrary to the international rules governing the conduct of .
-
war, the personnel of this regiment, mainly composed of Ger-
mans from beyond the border, made extensive use of enemy
uniforms and equipment in order to camouflage their opera-
tions.
"During the course of preparations for Germany's attack on
the U.S.S.R., the command of the Brandenburg Regiment also
collected supplies of Red Army uniforms, equipment, and
arms, and organized separate detachments of -Germans ac-
quainted with the Russian language."
Your Honors, the testimonies of Stoke, Bentivegni, and Piecken-
brock, which I have presented in evidence, disclose the working methods of the German Intelligence Service in the preparation and execution of Plan Barbarossa.
I shall not detain the Tribunal any further with these questions. But before proceeding to a further presentation, I should like to point out that the department of the Defendant Kaltenbrunner was likewise interested in intelligence work. I shall limit myself to submitting ene document which is typical of the manner in which the Hitlerites, by exploiting their connections, created difficulties in Iran, through which country, as was known, the supply routes passed for the delivery to. the U.S.S.R. of motor vehicles and war material of the most varied nature.
The document, which I intend to submit to the Tribunal as Exhibit
Number USSR-178 (Document Number USSR-178) was taken by us from the German Foreign Office archives, which fell into the
====
http://www.loc.gov/rr/frd/Military_Law/pdf/NT_Vol-XXXVIII.pdf
NT_Vol_XXXVIII.pdf, Blue - 279 (287)
===
DOCUMENT  102-R
SIXTH REPORT BY  THE  SO-CALLED  "EINSATZGRUPPEN"  IN  THE
SOVIET UNION, 1 TO 31 OCTOBER 1941, ON  THEIR ACTIVITIES AND
THE  SITUATION:  FIGHT  AGAINST  PARTISANS;  MASS  MURDERS
OF  JEWS;  SHOOTING OF COMMUNIST FUNCTIONARIES; SITUATION
IN  THE  BALTIC  COUNTRIES  AND  NORTHERN  RUSSIA,  IN  WHITE
RUSSIA  AND  THE  UKRAINE;  SPIRIT  AND  BEHAVIOR  OF  THE
POPULATION  IN  THE TWO LATTER  TERRITORIES;  VARIOUS  DE-
TAILS,  INCLUDING  A  REPORT  ON  THE  GERMAN  ETHNIC  GROUP
IN  THE  AREA  AROUND  LANDAU,  WHICH  THROUGH  ISOLATION
FROM  GERMANY  APPEARED  TO  BE  VERY  LITTLE  INFLUENCED
BY NATIONAL  SOCIALISM  (EXHIBIT USA-470)
-
\
BESCHREIRUNG:

http://www.loc.gov/rr/frd/Military_Law/pdf/NT_war-criminals_Vol-XII.pdf
1008 (1045)-
===
PARTIAL  TRANSLATION  OF  DOCUMENT  1365-PS
PROSECUTION  EXHIBIT  487
LETTER  FROM  SCHICKEDANZ,  STAFF  LEADER  OF  THE  FOREIGN  PO­
LITICAL  OFFICE  OF  THE  NAZI  PARTY,  TO  DEFENDANT  LAMMERS,
IS  JUNE  1939,  TRANSMITTING  "THE  PLAN  FOR  THE  EAST"l
15  June 1939
4617)39  SchijBa
To  the Reich Minister and Chief of  the Reich  Chancellery,
Dr. Hans Heinrich Lammers
Berlin W 8,  Voss  Strasse No.6
East Europe
Top  Secret!
Dear Minister Lammers:
.....
Western White-Ruthenia and  the Western  Ukraine.
....
After  the Carpatho-Ukraine was  ceded  to  Hungary,  the  entire
Ukrainian  public  opinion,  which  at  first  had  entirely  unfounded
hopes  for  a  specific  German  interest  in  that  territory,  became
openly  hostile.  In  a  very  adroit  way  this  attitude  is  being  en­
couraged  by Poland, Great Britain  and  France.  Ukrainian  pub­
lic  opinion  feels  that they were  somehow  cheated  in  their vague
expectations  without  having  any  real  reasons  for  that  attitude.
However, a  Ukrainian organization  (the OUN,  Le.,  the Organiza­
tion  of  Ukrainian  Nationalists), which  has  been  prepared  [aus­
gerichtet]  by the High Command  of the Wehrmacht  to deal with
special  tasks, has contributed greatly to  creating such an attitude.
That organization,  in public  statements  and  in  its  press  releases,
which  were  published  in  Germany,  demanded  national  independ­
ence  of  the  Carpatho-Ukraine,  although  it  had  been  deprived  of
its  life centers and  although  the possibility of an autarchic exist­
ence  [Selbsterhaltungsmoeglichkeit]  of  that  dismembered  terri­
tory  could  only  have  been  guaranteed  by  a  complete  economic
union with the Reich at that time.
Representatives  of  that  organization  played  a  fateful  role  in
the  Ukraine  with  respect  to  the  creation  of  incidents  with  the
Czech and Polish agencies and they also exerted constant pressure
upon  the  self-administration  of  the  country,  always  referring  to
the German military  power which was  backing  them  up,  as well
as  to  the fact that they had received a  certain authorization from
Greater  Germany.  The  Viennese  radio  transmissions  in  the
Ukrainian language also  followed  that general tendency.  All  this,
of course,  is well known by the entire Ukrainian public and  is  the
partial cause of their disappointment, which  is  directed  in  a  par­
ticularly outspoken  degree  against  the OUN.  That organization,
which  can  be  best  compared  with  the  Croat  Ustashi  group, is
probably still appointed by the High Command of the Wehrmacht
to  carry out certain  intelligence  tasks  in  the Western Ukraine  in
case of a  conflict with Poland.  It may be  suited  to  that purpose
but  it  is  entirely  unfit  for  leading  a  political  operation  which
should seize hold  of the population.
1014
...
Berlin,  14  June 1939
1015
====
На нескольких заседаниях Нюрнбергского трибунала всесторонне изучался вопрос формирования и боевого использования диверсионных подразделений из числа лиц негерманской национальности в т.ч. и украинских националистов.  Генерал Лахузен, начальник 2-го отдела Абвера,  свидетельствовал: «В соответствии с официально провозглашенными фон Риббентропом внешнеполитическими доктринами рейха и полученными  адмиралом Канарисом распоряжениями от начальника штаба ОКБ, генерал-фельдмаршала Кейтеля, абвер-2 проводил подготовку восстания в Галиции, главными целями которого была ликвидация коммунистов, евреев и поляков. Насколько мне известно, это решение было принято на совещании в салон-вагоне фельдмаршала Кейтеля». 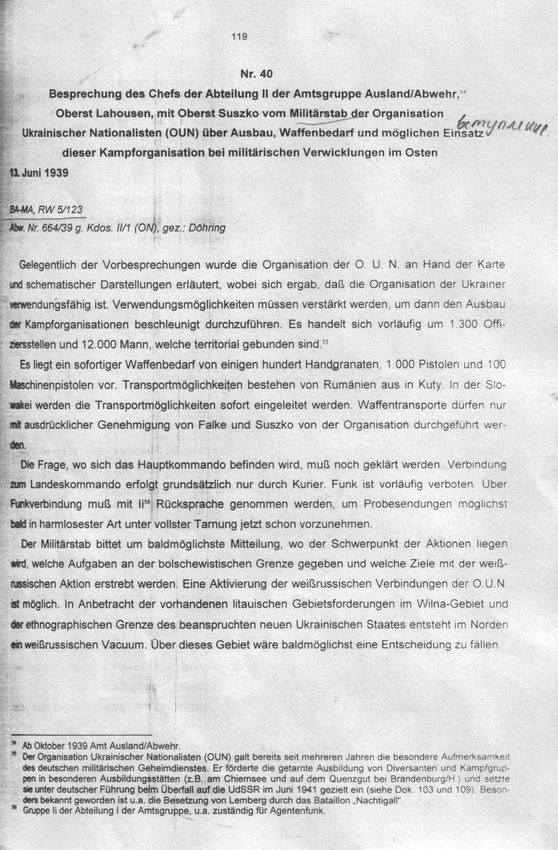 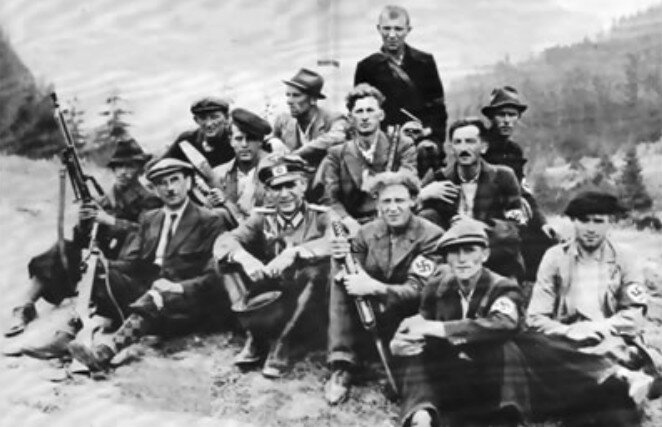